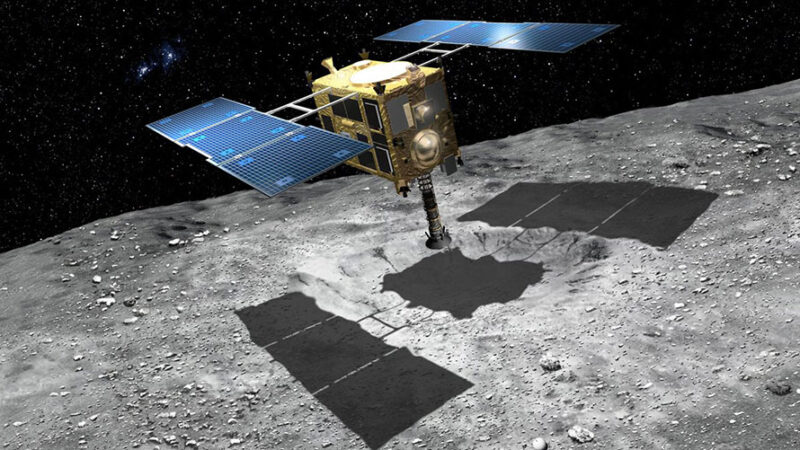 The main mission of the Japanese Hayabusa 2 mission ends in December. The spacecraft orbited asteroid Ryugu, examining it closely from June 2018 to November 2019. Currently, the Hayabusa 2 spacecraft is on the final stage of its return journey towards Earth. After a six-year mission, the probe will return to the vicinity of our planet and release a small return capsule. Along with the collected soil samples, it is to land at the Woomera military facility Australia. After passing Earth, the main Hayabusa 2 spacecraft will go on a further journey.

Asteroids, also called planetoids, are small celestial bodies that are leftovers from the formation of planets in the Solar System. Currently, we know nearly a million such objects, many of which circle the Sun in the so-called Asteroid Belt between Mars and Jupiter, and in the Kuiper Belt far beyond Neptune.

Ceres, the first observed asteroid, now known as a dwarf planet, was discovered in 1801. With the development of space telescopes and more advanced observation techniques, more and more such objects were discovered. At first, they were named after Greek mythology, and later after historical figures. Today, their numbers are so vast, that a combination of numbers and letters is used to list them in catalogues.

So far, only about a dozen space missions have studied asteroids. The Americans are in the lead in the number of missions, but the Japanese brought back the first soil samples to Earth. Below you can see a table listing all missions to asteroids conducted so far. Comet missions are not included in this chart. A more detailed overview can be found on Wikipedia. I can only recommend you to read it!

The mission of the second Peregrine Falcon

The Hayabusa 2 (Peregrine Falcon) mission is one of most complex space missions carried out by the Japanese Space Agency JAXA. It is the successor to the first Hayabusa mission. The first Peregrine Falcon faced several technical problems, including damaged solar panels, gyroscopic failure and the loss of the MINERVA lander. But in the end, after seven years it managed to bring back soil samples from the Itokawa asteroid.

The second Hayabusa was to study asteroid Ryugu from up close and bring its surface samples to Earth. The spacecraft measures 1 by 1.6 by 1.25 meters and weighs 610 kilograms. It was also equipped with three tiny MINERVA-II rovers and a German “bouncing” MASCOT lander.

The probe uses a very efficient ion engine that ejects heated xenon particles. Unlike rocket engines, it can run for a very long time, slowly changing the speed of the spacecraft. The acceleration itself is almost imperceptible, but it accumulates with the long engine running time. People often use the comparison of the weight of ping-pong ball on the palm to describe the engine’s thrust.

The mission’s destination was recently discovered in 1999. Initially the object was named as 1999 JU3. In 2015, it was renamed as Ryugu (Dragon Palace) in reference to a Japanese folk tale. According to legend the Ryugu Underwater Palace was visited by fisherman Urashima Tarō on the back of a turtle and returned later with a mysterious box. The same is to be the case with the Hayabusa 2 probe, which is also expected to return with soil samples. However, in the legend, the opening of the forbidden box led to a terrible tragedy… But on the other hand, the year 2020 will probably not surprise us with anything more.

Ryugu turned out to be a group of loosely holding space debris about 850 meters wide. Its mass is 450 million tons and its gravitational pull is an insane 0.11 millimeters per square second at the equator. As a reminder, gravity on Earth’s surface is 9.81 meters per square second. This means that it takes a very long time to fall on Ryugu, and you only need to push yourself slightly to launch back into space.

The spacecraft studied Ryugu for more than a year. The Hayabusa 2 probe orbited the asteroid between June 2018 and November 2019. Then it was sent back on a return journey. The arrival to Earth will take place in early December 2020.

After completing its main mission, the Hayabusa 2 probe will be directed towards another asteroid. Going into a new trajectory could be planned due to large amounts of available fuel. So far, the probe has used only slightly more than half of its xenon reserves.

Initially, the Japanese JAXA Space Agency considered sending Hayabusa 2 to an object named 2001 AV43. It is a small asteroid about 40 meters wide that orbits the Sun every 383 days. At the same time, it rotates around its axis every 612 seconds, i.e. every 10 minutes.

However, arrival at 2001 AV43 would require two gravity assists near Venus. This planet is much closer to the Sun, and therefore the probe would have to withstand higher temperatures. However, an analysis of JAXA engineers concluded that this would be too dangerous for spacecraft systems. Therefore, it was decided to choose a different target.

As result, asteroid 1998 KY26 became the new target. This object is even smaller than the initially considered 2001 AV43. It is approximately 30 meters in diameter, rotates on its axis every 10.7 minutes, and takes 500 days to orbit the Sun. 11 years are required for Hayabusa 2 to arrive. During the long journey, the spacecraft will approach Earth twice to perform a gravity assist. This maneuver will give it an extra kick and will significantly increase its speed. Earth flybys will take place in December 2027 and July 2028.

Additional research during the cruise

Along the way, the probe will make a quick flyby of an object named 2001 CC21. This asteroid is about 700 meters in diameter and rotates around its axis every 5 hours. It is a rarer type of asteroid known as “L-type” in the scientific jargon. This means, that in astronomical observations, it can be seen as very reddish. So far, we have not had the opportunity to study such objects from up close. Therefore, this will be a great opportunity to peek at a previously unexplored type of object in the Solar System.

During the remaining years of the long journey, the probe will also make other astronomical observations. Navigation cameras will be used to observe bright stars in search of exoplanets. By analyzing the regular diminishing brightness of stars, it is possible to detect planets orbiting them. Astronomers from JAXA are counting on the first discovery of an exoplanet from a Japanese space probe.

The second observation campaign will focus on studying the so-called zodiacal light. This phenomenon occurs when interplanetary dust ranging in size from 0.1 to 100 micrometers scatters sunlight. By carrying out such research, it is possible to better understand the distribution of matter in the Solar System. JAXA emphasizes that the study of zodiacal light far from Earth has not been done since the days of the American Pioneer probes in the early 1970s.

In conclusion, it must be said aloud that Japan has made a very large contribution to the study of asteroids. The Japanese were the first to bring soil samples from a celestial body other than the Moon. Now Japan will be taking first steps in studying extremely small asteroids. Our knowledge of the Solar System origins will be increased with a great deal of new information in the coming years. It will be worth the wait!