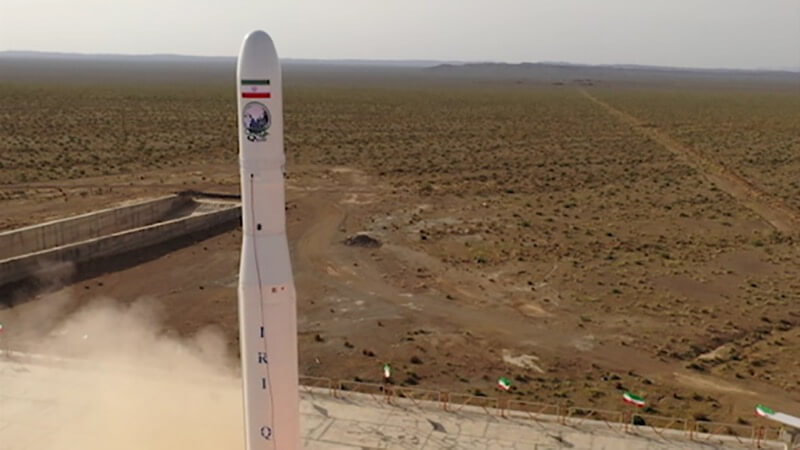 On April 22, 2020 the Islamic Revolutionary Guard launched their first military satellite. It was also the first successful rocket launch from the Islamic Republic of Iran after five-year long hiatus. In recent years, four previous launches of Safir and Simorgh launch vehicles have exploded in flight. This time, a completely new Qased rocket was used to lift the Noor-1 satellite.

Noor-1 (meaning Light in Farsi نور) is the first Iranian military satellite. After the launch both Noor-1 and the Qased upper stage have been observed in a near circular orbit at an altitude of 426 by 444 kilometers and inclination of 59.8 degrees.

Whereas the Persians did not share any public details about the satellite, radio amateurs received (and decrypted!) its telemetry. The received data suggests that Noor-1 was produced with the use of CubeSat type commercial components. CubeSat satellites have a standardized size. One unit (1U) is a cube sized 10 x 10 x 11.35 cm. CubeSats can be also assembled into larger structures involving many units.

CubeSat missions were originally aimed for educational and technology testing purposes. Multiple components, or even complete CubeSat system solutions can be purchased in specialized stores. By using those, beginner space engineers can easily assemble a satellite without the need to carefully design each component.

As for Noor-1, two sources of information on the size of the satellite were published. One suggests that it is a 3U standard CubeSat. Another mentions the 6U standard, i.e., an object consisting of six units, each sized 10 x 10 x 11.35 cm. The maximum mass for a 3U CubeSat is 4 kg and for the second it is 12 kg.

A more interesting story is related to the components obtained for the Noor-1 project. Due to economic sanctions, Iran should not be able to purchase such equipment. The analysis of the Skyriddles blog described in detail where the information on the two sizes of Noor-1 appeared. It also reports that its hardware… was previously used in a Mexican military observation satellite. Painani 1, was launched in June 2019 by a New Zealand company with the Electron rocket.

And now the question arises … how did the Iranian armed forces get hardware designed for Mexican military uses? There may be an interesting spy story behind it.

New players in the space sector

More important is that apart from building a satellite, the Islamic Revolutionary Guard Corps was responsible for the construction and launch of the Qased rocket. This formation includes both Basiji thug militias and specialized armed forces. They also include the Quds Force, a special operations group. Until January 2020 it was led by General Ghasem Solajmani, who was killed in a rocket attack, which almost broke the US-Iran war.

Moreover, since 2019, the Islamic Revolutionary Guardians are recognized as a terrorist organization by the US, Bahrain and Saudi Arabia. This is probably a sign of our interesting times that in 2020 such group is able to build a satellite and launch a space rocket.

The successful launch of the Qased rocket (قاصد meaning Messenger in Farsi) indicates an advanced missile program led by this formation. Fabian Hinz, a Middle East analyst, suggests on Twitter that the Islamic Revolutionary Guardians have been working on solid fuel rockets since the mid-2000s. And this may turn into a large military problem.

In short: liquid propellant rockets (using for example hydrogen and oxygen as fuel and oxidizer) can carry heavier payloads. On the other hand storage, refuelling and preparations for launch take longer time. Solid fuel rockets do not have such restrictions. You just push the red button, and the rocket starts flying right away. Guess which solution is more interesting for the military?

In the maiden flight of the „Messenger”, the liquid fuel Ghadr ballistic missile was used as first stage. This configuration was commented by the commander of the air force of the Islamic Revolutionary Guards. Amir Ali Hajizadeh, described in an Iranian televised interview that this is a temporary solution. Ultimately the entire structure is to be powered by solid fuel.

The second stage of the Qased rocket was powered by solid fuel. It used a demonstration engine called Salman. The third stage was a small engine that put the tiny Noor-1 satellite into a circular orbit. Hajizadeh’s public comments about upcoming satellite launches into much higher orbits (MEO and GEO, 2,000 and 35,786 km respectively) suggest that the flight of the small intelligence Noor-1 was only a demonstration mission. Soon more Qased missiles will launch in a much more powerful configuration. Unfortunately, that is a cause for alarm.

Under the guise of launching satellites, it is easy to develop solid fuel rocket. However, such launchers can be very adapted for other, more lethal applications. As expected, the launch of the Qased rocket has already been heavily protested by the US administration. The US Secretary of State stated, “that the Iranian missile program is neither civil nor peaceful.”. In conclusion, in context of the current US-Iranian relations, this is not a good sign.