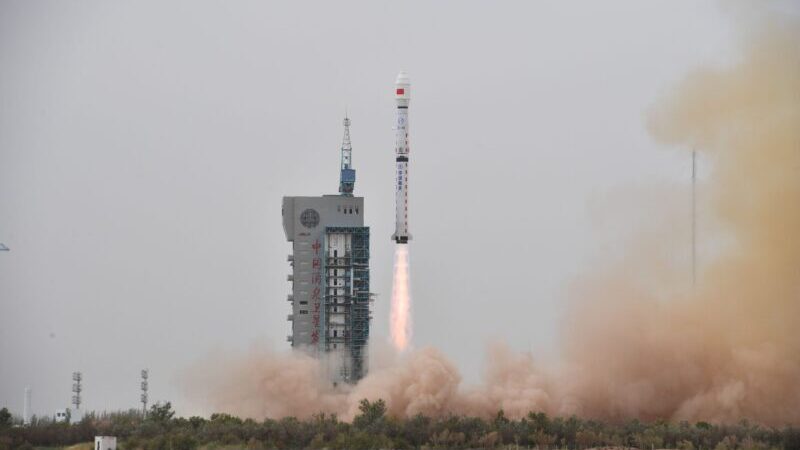 On Monday, September 21, a Long March 4B rocket launched from the Jiuquan spaceport. The Haiyang 2C oceanographic satellite was placed into orbit.

The Xinhua news agency Xinhua reported the successful launch of the Haiyang 2C. On orbit it will join previously launched Haiyang 2A and 2B. By carrying out joint observations, they will be able to cover 80% of the world’s oceans within six hours.

First, let me provide you a few technical details. Hǎiyáng (海洋) means ocean in Mandarin. Seven oceanographic satellites were launched under the program with that name. The satellite units can be distinguished by the number and letter of the Latin alphabet, denoting the generation and the order in which the satellite was launched. For example, let’s take the description of the recently launched Haiyang 2C. It means the third satellite of the second generation.

The second generation Haiyang satellites were approved in February 2007. Their purpose is to collect data about the ocean dynamics and environment. By using microwave instruments, they also measure wind directions, ocean surface height and water surface temperature. The Haiyang satellites were built at the facilities of the Dongfanghong Satellite Corporation owned by China Aerospace Science & Technology Corporation (CASC).

Haiyang 2C is placed in a Low Earth Orbit inclined 66 degrees to the equator. Previous satellites of the 2A and 2B constellations are circling the planet in a higher, Sun synchronous orbit. In result, their path around the Earth allows observations to be made always in the same illumination. Next year, the Haiyang constellation is to be completed by another second-generation oceanographic satellite.

You can read more technical details on the official website of the Chinese NSOAS operator. But for now, only information about Haiyang 2B is available at that source. Haiyang 2C differs slightly in equipped scientific payloads. Depending on the source read, it has an added or removed microwave radiometer.

To sum up, below is a small table showing all Haiyang satellites by launch. Yes, I do like tables:

One should definitely pay attention to recent developments of launcher technologies used on the occasion of the scientific mission launch. To speak more precisely, the first stage of the Long March 4B rocket was equipped with grid fins. They allow to control and steer the stage’s fall after the first launch phase.

Some of the Chinese spaceports are located in the center of the country. Because of this when space rockets take off, their flight path was over inhabited areas. In result first stages often fell on the villages. To make things worse, some Chinese rockets are powered by a very toxic fuel (UDMH, 1,1-dimethylhydrazine). This substance was informally nicknamed “Devil’s venom” by early Soviet rocket engineers.

Meanly one could ask what forced the Chinese space industry policymakers to introduce this innovation. It seems that their decisions were mostly influenced by the achievements of the SpaceX. The US company showed that a returning rocket stage can be both maneuvered and landed. Rocket reusability translates into a significant reduction in costs of launching payloads into orbit. And that was probably the main reason for the introduction of grid fins. To conclude, with this innovation China can develop reusable rocket stages.