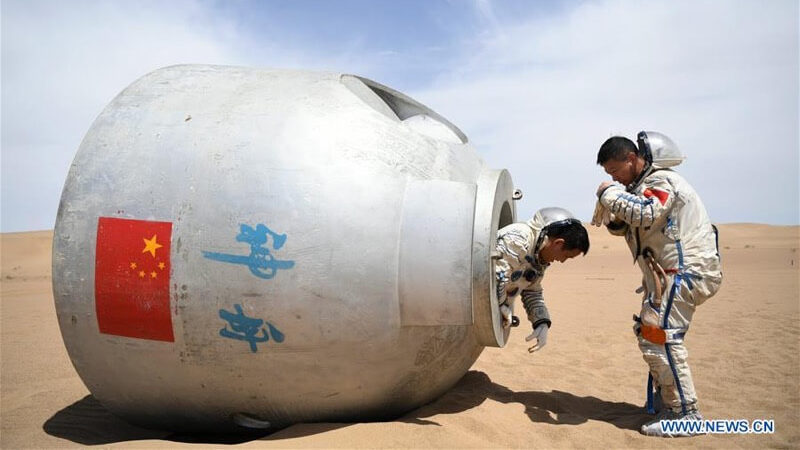 Speaking of crewed spaceflight we use different names for those taking part in them: astronaut, cosmonaut, and in recent times even taikonaut. Why is there such distinction and is it today still justified?

The division into astronauts and cosmonauts is derived from the historic beginnings of the space race, when two superpowers, the US and the Soviet Union competed for supremacy in space. Today this division is not so important anymore and it is rather exaggerated. I would like to elaborate on this in the following article.

Both terms: astronaut and cosmonaut mean in practice the same profession, a space sailor. It is a trained professional participating in a space mission. At the turn of the 1950s and 1960s, i.e. the first years of the space race, these individuals were young and feisty military pilots. They were selected after rigorous training, involving high levels of acceleration and risky flights on experimental planes.

The Americans used the term astronaut whereas the Soviets used the term cosmonaut. The first to fly were almost superheroes, perfect alpha males without the slightest flaw. They were to be exemplary citizens. They had to be ready to make the greatest sacrifice for their own country. And they had to act as ambassadors in the world. The slightest flaws from this image (such as divorce) were punished with removal from the corps.

With time, this image has changed. Not only testosterone-packed test pilots began to fly into space. They were joined by male and female mission specialists. The double division into astronauts and cosmonauts remained in use, although the matter started to get somewhat complicated with the first space flights of third-country nationals.

Astronauts and cosmonauts from befriended countries

At first the Soviet Union started to invite other countries to join the space club. From the mid-1970s it organized space missions for the first cosmonaut from Czechoslovakia, the Polish People’s Republic, the German Democratic Republic, Bulgaria, Cuba and other befriended East Block countries as part of the Intercosmos program. The US was second. The start of the space shuttle program allowed new opportunities. NASA began inviting astronauts from US-friendly countries to participate in space missions. In the 1980s, the first nationals of the Federal Republic of Germany, Canada, Saudi Arabia, the Netherlands and Italy made it into orbit onboard the space shuttle.

Everything seemed simple in a heavily divided world. However, in 1982 and 1988, the first Frenchman Jean-Loup Chrétien, flew to the Mir station as cosmonaut. A second French national, Patrick Baudry, flew as an astronaut aboard the American space shuttle Discovery in 1985. For a moment, one could wonder whether the division does run along the line: you fly on American shuttles – you’re an astronaut, you fly on the Russian Soyuz – you’re a cosmonaut. But in 1994, Ulf Merbold from Germany flew with the Russians to the Mir Station. But previously he had flown into space twice on board an American shuttle.

Another stage was reached with the launch of the International Space Station project, the largest object ever built in space. After decades of competiting, both space superpowers started to prepare for the ISS assembly by conducting joint space missions. American astronauts flew onboard Soyuz ships to the Mir Space Station, whereas Russians participated in space shuttle missions. At that time, press reports mentioned it as “NASA astronaut flew into orbit with Russian cosmonauts.”

With the development of the ISS program, a new phenomenon appeared. There have been cases of Americans who flew into space only onboard a Russian Soyuz spacecraft. It also occurred on the other way around. A few Russians flew into space seated on American space shuttles.

Is a space tourist an astronaut?

The first space tourists also came onboard the ISS. I mean here the people who are not professional astronauts, but very rich individuals who completed several months of training. This fancy involving a 7-10 day long orbital space flight cost them a modest amount of about 30-50 million USD. Charles Simonyi, a former Microsoft employee, liked the space experience flight so much that he flew to the ISS twice.

Whereas several tourist flights took place onboard the International Space Station, another discussion arose. It was disputed whether those individuals should be called astronauts, space tourists, or spaceflight participants.

Chinese and Indians in space

In 2003, the first Chinese national reached orbit aboard the Shenzhou spacecraft (Chinese: Divine Vessel). Thus the  People’s Republic of China became the third country to independently conduct a crewed space mission. Now the discussion of how to call Chinese space mission participants resumed.

The name taikonaut (from the Mandarin tàikōng meaning cosmos) has been proposed. The name was popularized by journalist Chen Lan and the Go Taikonauts website. This was one of the main sources of information about the Chinese space program on the web at the turn of the 90s and 00s. However, it should be noted, that the Chinese do not use this term on their own. In China the term yŭhángyuán is used, meaning both astronaut and cosmonaut.

Naming issues are also discussed in India. The country is currently conducting advanced preparations to starts its own crewed program. In 2022, an Indian crew is to launch into orbit onboard the Gaganyaan spacecraft. Four flight candidates are currently training in Star City near Moscow. In this context, terms such as gaganaut and even viomanaut (from Sanskrit gagan and vyoma meaning heaven) are mentioned.

To conclude, you may wonder whether it makes sense to use such different terms for individuals working in the same profession. The historical division had some justification in the sixties. Today, on the threshold of the third decade of the 21st century, it would be better to stop using many terms (and adding new ones) and just focus on one.

Especially that over 560 people have already flown into orbit and there are many indications that in the coming decades there will be many more of them. Therefore, in this blog, for describing upcoming crewed space missions I will use the term astronaut.